The Siege Of Ladysmith

The telegraph operator tapped the keys of his apparatus, listened intently but there was no response. The Boers had cut the line. It was 14h30 on Thursday, 2nd November 1899 and the siege of Ladysmith had begun.

Although humiliating, the siege was not necessarily a disaster in itself. The town was well provisioned and General White was later to suggest that he had allowed his force to be besieged as a deliberate military strategy. Perhaps so, but then he was expecting to be cut off for a few days, a week or two at most as General Buller’s First Army Corps had already begun to arrive in Cape Town. No unprofessional bunch of farmers could withstand such a force! - or could they?

The truth of the matter was that the siege dragged on for 118 days and by the time the relief column made their weary way into the town at 17h30 on the 28th water had passed under the bridge. Almost 850 British soldiers were dead. 54 civilians had died and the Boer artillery had fired 20 000 shells into the town. The provisions were nearly exhausted and the troops were reduced to eating the emaciated cavalry horses. 2 800 sick and wounded soldiers needed to be evacuated to medical facilities closer to the coast. February 1900, much

For four months, the attention of the world had been riveted on this small town. Then it slipped once again into relative obscurity as the war moved on. 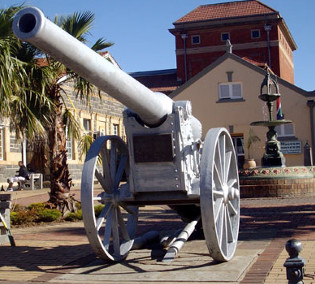