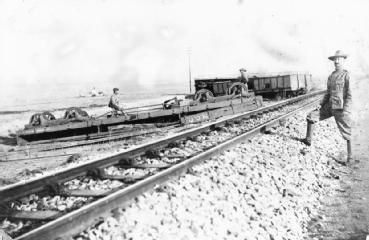 “An act of inconceivable stupidity!” fumed General Buller when he heard of the incident at Frere where a Boer raiding party attacked a train that had been sent north from the town of Estcourt to reconnoiter the ground towards Colenso and the Thukela River.

What had happened to cause Buller’s irritation? When Ladysmith had been cut off on 02nd November, Col. Long (RFA) had withdrawn his small force, from the Thukela River town of Colenso, to Estcourt some 40 kms to the south. From that time he had attempted to gather information on Boer activity as best he could – one of the methods used being a regular patrol by an “armoured” train. On that fateful Wednesday the train, under the command of Captain Aylmer Haldane, set out from Estcourt at 05h30, blissfully unaware that a Boer raiding party of 2 000 men had crossed onto the south bank of the Thukela the previous day.

Accompanying the troops in the train was a newspaper correspondent, Winston Churchill, still a few days short of his 25th birthday.

Shortly after 08h00 the train cannoned at high speed into the obstruction placed on the line. Two trucks overturned and the battle was joined. Churchill initiated and directed the attempts to re-open the line whilst Haldane took responsibility for the defense of the train. It was not too long before, despite galling rifle fire from the Boers, the locomotive and coal tender forced their way past the obstruction and began withdrawing towards the nearby village of Frere - the soldiers running alongside. The Boers were quick to pursue the departing train and, with the advantage of being mounted, soon overtook the laggards amongst the British troops and began taking prisoners. Churchill abandoned the comparative safety of the locomotive and ran back to assist Haldane with the withdrawal, but succeeded only in being captured himself.

This incident was yet another embarrassment for Great Britain’s military with the one mitigating factor being the heroism shown by the young Churchill. When he managed to escape from Boer custody a few weeks later and make his way back to Natal, the resultant publicity did much to catapult into the public eye and assist with his subsequent career in politics.