The hill was taken. The Boers had fled. Stumbling across the rock strewn crest of Spioenkop, still wet from the overnight rain, British officers marked out the line for the defensive trench. It was 06h00 when the Royal Engineers and men of the Lancashire Brigade set to work.

A little to the north the Boers were close to panic. There were “thousands of Tommies on the hill”. Perhaps they should withdraw to Ladysmith. But, not for the first time, one man – the young Boer general, Louis Botha - stood firm. Using the misty conditions to the best advantage, he began deploying his commandos and artillery. By 07h30 all was in readiness. Seven guns were within range of where the British soldiers, still hidden in the mist, were digging their trench. Members of several commandos - Carolina, Pretoria, Lydenburg, Ermelo, the German Corps and others – moved into position, some beginning their ascent of the north-eastern slopes of the hill.

On the summit, the trench was ready. Everyone waited for the mist to lift.

Soon after 08h00 the mist melted away and the battle was joined. The next 10 hours were to be amongst the most horrific in the annals of warfare up to that time. The sun would rise the following day on, what John Atkins of the Manchester Guardian termed “the acre of massacre”. Over a thousand bodies of the dead and wounded, horribly mutilated by artillery, lay in heaps. The battle was over. The hill was lost. But had any lessons been learned? 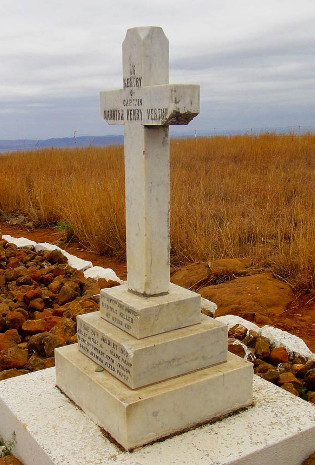