In the gathering dusk the cavalry crested the rise and bore down on the retreating Boers. A few minutes later the ground was strewn with the dead and dying. The Battle of Elandslaagte was finally over. The stretcher bearers and medical personnel were left to stumble about the killing field in the darkness. The rain continued to fall and it soon became bitterly cold.

It had begun two days earlier when Boers occupied the railway station at Elandslaagte, to the south of Dundee. General White, realising that his troops in Dundee were in danger of being isolated, decided to drive the Boers off. General French was appointed to command the British force which had assembled by mid-afternoon. The attack began, despite the looming thunder clouds. Infantry in the centre with mounted troops on both flanks. The Boer forces had withdrawn to a good position to the south east of the railway line forcing the British to attack over open ground. Helped by a torrential downpour, the infantry eventually overcame spirited Boer resistance and by 18h30 the Boers were riding away to the north and their bloody date with French’s cavalry.

No sooner had the ground been won, than General White ordered that the position be abandoned and fell back on Ladysmith. Orange Free State Boers soon re-occupied Elandslaagte. The battle had hurt them however. Their general was dead together with over 40 of his men and they had been exposed for the first time to the brutal side of war. 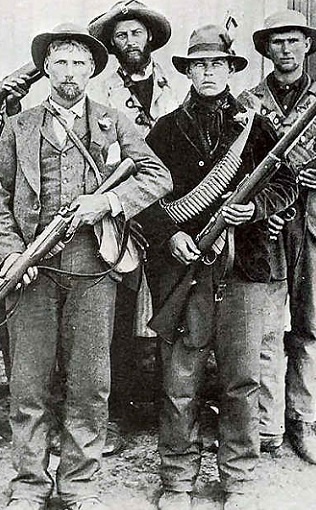